Adapted from a devotional previously shared on this blog on May 19, 2016. 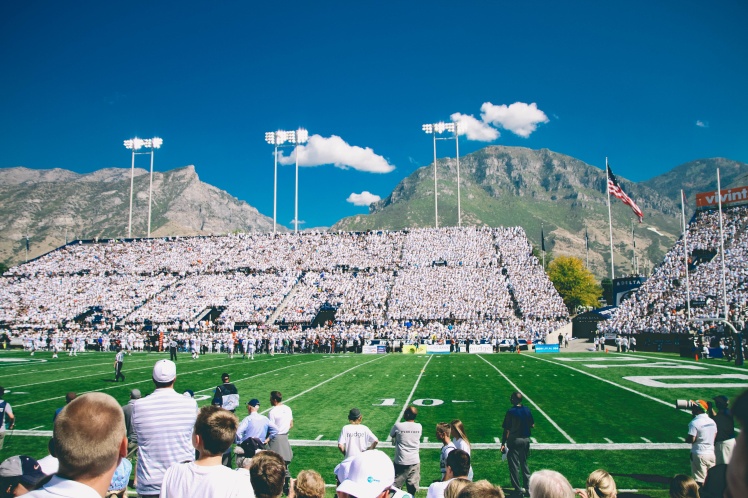 “Gentlemen, this is a football.”

That is how Vince Lombardi, started each season on his team’s practice field. Lombardi, the former coach of the Green Bay Packers who led them to victory in the first ever Super Bowl (and the one after that), would take his world-class football team and start each new season by taking them way back to the basics.

What this famous coach wanted to impart was this: keep the center thing the center. Football is about the football. If the basics were wrong, then everything that followed would be wrong, too.

What is the heart of the Christian faith? Our central mission?

Today we meet Jesus at the very end of Matthew’s Gospel. A lot has happened in 28 chapters. Jesus was born. He lived an incredible life. Then he died. Three days later, he rose from the grave. He was healed and whole and every inch the Savior his disciples hoped he was—and then he told them to go to Galilee and wait for him there.

We meet Jesus’ disciples—eleven of them, anyway—waiting on the top of a mountain in Galilee. They are gathered there to see what this man who was dead and is now alive has to say. What the plan is now. No doubt their heads are spinning. It’s been a crazy week.

Jesus shows up. Most of his disciples fall to their knees with joy and wonder. But a few of them hang back. They doubt. They aren’t sure if they should give themselves fully to this new reality because none of it is as they thought it would be.

They thought they were following a man who would become king, yet they have seen fearful brutality against him. They thought he would usher in a new era of peace on earth, but instead they watched him die.

Then he rose from the dead—but they have no category for that. So some of them hang back—unsure of whether they should risk themselves totally. Given what’s happened, risking themselves for this unpredictable savior doesn’t seem like the safest thing to do.

When we doubt we have a choice between obedience and disobedience. When we doubt, obedience is not not doubting. Sometimes we will have doubts—it is part of the Christian life.

Yet when we doubt, do we continue to obey? Do we put ourselves in places where God can continue to speak to us—in our small group, at church, in prayer, in Scripture? Even though the disciples are struggling with doubt, they have already obeyed Jesus by coming to the mountain in Galilee to meet with him.

They just need some help with their unbelief.

So Jesus sets down the basics for them. The thing they must remember. The central thing. Jesus’ version of “This is a football.” Here is our job. The basic thing he wants us to do. Our mission:

16 Then the eleven disciples went to Galilee, to the mountain where Jesus had told them to go. 17 When they saw him, they worshiped him; but some doubted.18 Then Jesus came to them and said, “All authority in heaven and on earth has been given to me. 19 Therefore go and make disciples of all nations, baptizing them in the name of the Father and of the Son and of the Holy Spirit, 20 and teaching them to obey everything I have commanded you. And surely I am with you always, to the very end of the age.”

This is a tall order, and Jesus knows it. Making disciples is no easy task. So he follows it up with some of the most comforting words in all of Scripture. “I will be with you. Day after day after day. Right up to the end of the age.” Always.

When I was in early high school, our small Bible study wanted to grow. So we prayed that we would get more members. We prayed every week. But I never, ever asked anyone to join. Neither did anyone else.

I remember having this dream that a bus full of high schoolers would just show up. I didn’t know how, because I sure wasn’t going to ask anyone, but God can do anything, right?

Do you relate? Maybe you’re praying, “God, bring my neighbor to my house,” or “God, if you want that person to know about you, let them ask me.”

Yet that’s not often how it works. Making disciples takes risk.

But do you know what? Jesus has given you the authority. And Jesus himself will be with you. The kingdom is coming. As the great British theologian N.T. Wright notes, “Every time we say the words ‘Our father…’ we are pleading for that day to be soon, and pledging ourselves to work to bring it closer.”

This is a football.