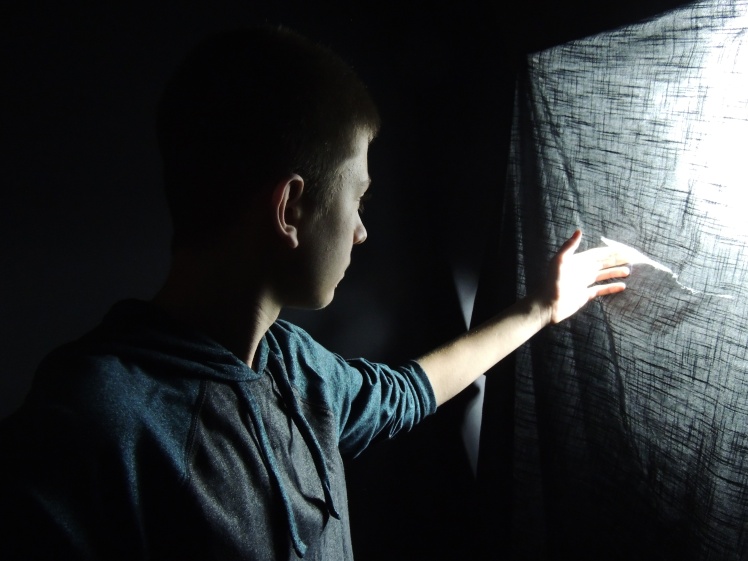 This is adapted from a sermon I gave in December of 2012, just after the horrific shooting at Sandy Hook Elementary in Newtown, Connecticut. At the time, it was the second deadliest mass shooting in U.S. history. After Saturday night’s shooting in Orlando, it is now the third.

I was brave back in college. I rock climbed. I guided whitewater rafting and kayaking trips. I bumbled into bad neighborhoods in downtown Chicago. I rarely felt afraid.

Fast forward a decade. My husband Daryl and I welcomed our firstborn, a sweet, snuggly little boy. And all of a sudden I felt afraid all the time.

Yes, I was a paranoid first-time mother. 99% of my fears (colic! eczema! baby snatchers! not enough tummy time!!!) were unfounded. No baby dies if he’s one degree to warm or too cold. The pediatrician was sick to death of my frantic phone calls over small matters.

But here’s the thing. Sometimes the unthinkable does happen.

My youngest sister contracted meningitis when she was eight months old. The doctors told my parents it was unlikely she would survive the night. She made it (you’ve never met a fighter like my sister, even when she was tiny), and the next weeks were a blur as my middle sister and I were passed between grandparents in Illinois and Wisconsin so my parents could hold vigil at her hospital bedside.

My sister eventually fully recovered – the doctors called it a miracle – but every day there are children who don’t. Every day the unthinkable happens.

As awful as it is to lose (or nearly lose) a loved one to illness, there is something a bit natural about germs and cells and sickness. But when a person is ripped from us suddenly because of human violence, it can shake us to our cores.

This is not the sermon I planned to preach today. But sometimes human events disrupt our plans, and sometimes those events are acts of unspeakable violence.

How can I preach at all after what happened this week? What could I possibly have to say in light of such unspeakable evil?

And – even more importantly – where is God today?

Scripture has a term for the outpouring of grief that happens when a community experiences evil. It’s called lament. It’s the name for what happens when we cry together, pray together, plead for God to intervene together. It’s a word for gathering together to light candles to protest the darkness that infects our world. It’s the term for collectively feeling sick to our proverbial stomachs and vowing to do all that we can to turn the tide of violence in our midst.

When we feel powerless in the face of evil, we lament. When we wake to news that an elementary school or a community center or a gay nightclub has been the scene of unimaginable brutality, we lament.

In Matthew 1, we read the story of Jesus’ birth. But just a few verses later, in Matthew 2, the story takes a dark turn.

16 When Herod realized that he had been outwitted by the Magi, he was furious, and he gave orders to kill all the boys in Bethlehem and its vicinity who were two years old and under, in accordance with the time he had learned from the Magi.17 Then what was said through the prophet Jeremiah was fulfilled:

18 “A voice is heard in Ramah, weeping and great mourning, Rachel weeping for her children and refusing to be comforted, because they are no more.”

Far from the shepherds and mangers, now we are faced with Rachel – representing all women, but here specifically linked to the mothers whose babies were torn away by King Herod in his bloodthirsty lust for power.

There was evil in Jesus’ time, too. Rampant, horrific evil.

This passage is referred to as Herod’s “slaughter of the innocents,” a story made even more gruesome by the fact that a king was slaughtering the most defenseless of his own citizens. Kings were supposed to protect and love their people, to care for them and watch over them. Instead, Herod turns his wrath against the most powerless of all.

It is in times like these that I remember Martin Luther’s words. He was holed up in Wartburg Castle, fleeing those who were actively seeking to take his life. Frustrated with the evil that threatened from every side, exhausted by the cares of this world, he lamented, “They threaten us with death. They would do better to threaten us with life.”

Who can go on in the face of evil? What can we do or say that will help ameliorate even a little bit of the pain and fear that accompanies today’s senseless slaughter?

Scripture is filled with lament. Isaiah, Jeremiah, the minor prophets, the Psalms. In Luke 19, Jesus weeps over Jerusalem. He wants so much better for it, but again and again its people choose darkness over light, and evil over good.

Scripture is clear that when evil things happen, God weeps with us. Wherever violence takes place. Whenever murder and hatred look as if they will win the day. Any place there is darkness, any time there is depravity, we are called to the discipline of lament.

And it is a discipline, for there are no answers in lament. We don’t know why these things happen, only that they do. That again, today, they did. Yet in lament we go before God with the community of Christians around the world and we say, “This hurts. We want a new way. We are sorry. We are sad – so unspeakably sad. We are out of words. Save us, Jesus. Help us, help us, help us.”

The Christmas hymn “I Heard the Bells” was written after war wracked this country. The author felt nothing but despair in his soul. For him, there was no hope. So he put pen to paper to chronicle the death of his hope. But as he wrote, he felt the Lord speak to him.

And in despair I bowed my head.

“There is no peace on earth,” I said,

“For hate is strong and mocks the song

Of peace on earth, goodwill to men.”

Then pealed the bells more loud and deep:

“God is not dead, nor doth He sleep;

The wrong shall fail, the right prevail

With peace on earth, goodwill to men.”

Radical hope in the midst of despair. Then, as now. Today, as before. Tomorrow, as in the time of Herod. God is not dead, nor does he sleep.

After the shooting at the elementary school in Newtown, people streamed into area churches. Clergy felt utterly unprepared. What answers could they offer as they looked into the tear-streaked faces crammed into their sanctuaries? One Catholic priest looked out over the crowd of mourners, still in absolute shock, and said, simply: “Where do you turn on a day like this? You turn to God, because where else can you go?”

Christians are a people of hope and joy, but we are also a people of lament. There is evil and sin loose in this world, and we grieve with those who grieve. As we look evil in the face, we remember that it does not, it cannot, it will not have the final word.

To Newtown, to San Bernardino, to Orlando, to us all, come, Lord Jesus!

2 thoughts on “When All You Can Do is Lament”